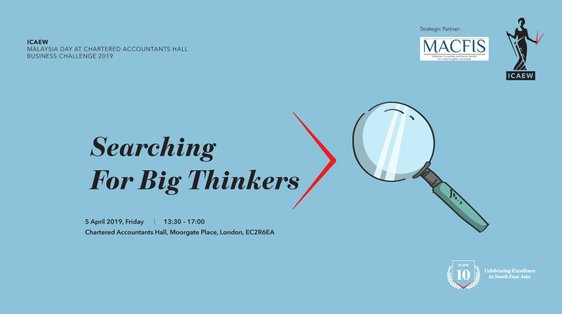 The ICAEW x MACFIS Business Challenge is one of our annual flagship events held with our strategic partner, ICAEW Malaysia. Every year, the event is held at Chartered Accountants’ Hall in London.

Attended by employers from top firms in Malaysia that are in town for the UKEC-GRADUAN Career Fair, the Business Challenge is a case study competition that challenges participants’ business acumen, problem-solving and presentation skills. The Business Challenge serves as a platform for undergraduates to have a taste of what it's like to work as a chartered accountant.

Participants also take the opportunity to connect with employers present at the event.

The ICAEWxMACFIS Business Challenge 2019 ran for half a day at the esteemed Chartered Accountant’s Hall in Moorgate, London. This year, we had 12 teams participating with judges from 8 companies present. Apart from our patron PwC Malaysia, we also had representatives from EY, KPMG, UOB, Maybank, Samsung, CIMB and Maxis! With a total prize pool of £3,200 sponsored by the participating companies, the Business Challenge had the participants sitting off the edge of their seats!

After opening remarks from the Head of ICAEW, participants were invited for a networking lunch session whereby they could socialise with employers from the participating companies. This was followed by introductory speeches from the Managing Partner of PwC Malaysia and President of MACFIS.

12 teams were invited to conduct the case study group discussions, followed by team presentations split into two rooms. In the end, teams Imperial Ratio and Asian PersuAsian were crowned champions and walked away with the Grand Prize. Among other prizes claimed were Most Agile, Most Collaborative, Most Innovative, Best Speaker awards and the Maybank Ultimate Challenger Award.

The Malaysian Accounting and Finance Society (MACFIS) is dedicated to fostering formal and informal ties between Malaysian professional and corporate bodies and Malaysian students currently enrolled in UK institutions of higher learning.

Follow our social media for more Information and upcoming events